A Spiritual Journey Message Board

A forum to primarily discuss the Padgett Messages.
https://board.new-birth.net/

by Sofia
I found this small pocket sized book of wisdoms just great. Quote books of sayings in general can sometimes be tedious: often truisms thrown together that no-one can live by, few believe - not even the person who put the collection together. That's why I like A. Robert Smith's Robert's 101 Rules of Order for a GOOD LIFE.

A. Robert Smith is a veteran journalist and author. He was the founding editor of Venture Inward magazine, author of nine previous books, including The Lost Memoirs of Edward Cayce and a former Washington correspondent and columnist whose work has been published in the New York Times Magazine, Newsday, Philadelphia Inquirer, Washington Post, Portland Oregonian, Virginian-Pilot and other publications. He wrote Robert's 101 after recovering from a massive stroke and published the book recently at the age of 91. As far as wisdom sayings go - he knows more than most what he is talking about.

Mr. Smith uses the old-fashioned style of proverbs―short statements that are meaningful and often humorous. About half of the proverbs contained here express his views on marriage, family relations, child behavior, and other earthy topics. The other half includes proverbs and sayings by popular figures, such as Ben Franklin, Shakespeare, Confucius, Schweitzer, Churchill, the Buddha, Maya Angelou, Mark Twain, and Will Rogers.

This is a book that made me smile. Very well excecuted in it's gengre.

Or as Mr. Smith and Confucious states it:

"'Choose a job you love and you will never have to work a day in your life,' said Confusius.
I chose a writer's life, and loved it; it often meant working overtime - but I loved that too." 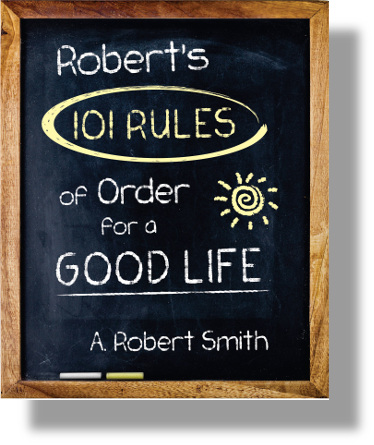